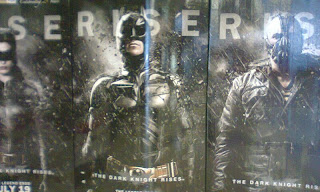 Ok, just finished watching the Dark Knight Rises. The haunting chant of “deshi deshi bashara bashara” is still ringing in my head. What are my thoughts of the latest Batman movie? Here goes... 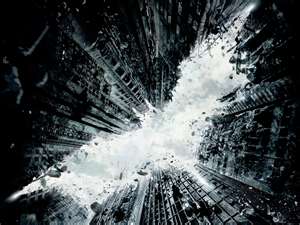 So what is the Dark Knight Rises about?


Generally it starts slowly, with the viewers getting introduced to the villainous Bane. You can’t really see his face, as it is mostly obstructed by a mouth piece type device (kinda like Darth Vader). Note: Bane’s voice is also electronically muffled, also giving him a Darth Vader kind of voice.
Anyway, we learn that Bane is heading to Gotham, and his aim is to cause maximum carnage and terror. We find out later it is to fulfill Ra’s Al Ghul’s destiny (which was thwarted by Batman in Batman Begins).
In the meantime, our hero Batman has been “retired” for 8 years since defeating the Joker in The Dark Knight, and is living the life of a reclusive billionaire. He bumps into Selina Kyle/Catwoman along the way, and eventually comes out of retirement to don his cowl and cape when he sees Bane make his move at the Stock Exchange.
This is where the action and excitement picks up. We finally see Bats in his full Dark Knight glory and I think we all have the same thought when the bystander cop tells his rookie partner that we are “in for a show...”
What follows is the Dark Knight’s first showdown with Bane in the underground sewers. As we know from the comics, a rusty and off form Batman is badly beaten by Bane and he is taken away to a prison (likely controlled by the League of Shadows).
With Gotham’s protector gone, Bane strikes mayhem and terror as he forcibly takes over in the city, and causes the arming of a nuclear device, set to detonate soon. Commissioner Jim Gordon, Detective Blake, Lucius Fox and the remaining police force do what they can to protect the city against Bane’s criminal army but are hopelessly outgunned and outnumbered. Batman eventually returns (his second comeback in the movie), and with the help of Catwoman, they take on Bane and his soldiers, and try to save Gotham from getting nuked into oblivion.
So how was the movie?
One word best describes Dark Knight Rises: AWESOME!!!
I would say that this is probably THE BEST superhero epic of all time. Yeah, the other epic superhero flick, the Avengers was great as well, but Rises is in a different league. Where Avengers was more of a fun, popcorn adventure, I found Dark Knight Rises to be a monumental roller coaster ride of excitement, drama, suspense, action and emotion. I felt despair when Batman was soundly defeated by Bane. Later seeing Bruce Wayne rise from the depth of the prison into the light of freedom almost made me shout out “Yeah!! Go get that sonnuvabitch, Batman!”
It was also great to see the whole cast play their roles convincingly. Can there be a better Batman than Christian Bale? I doubt it (though I hope I’m proven wrong). And I always liked seeing Michael Caine as Alfred. You could feel his pain and heartbreak when he tried to talk Bruce from coming out of retirement.
The other guys like Morgan Freeman (Lucius), Gary Oldman (Gordon) were also solid as usual. The newcomers put on a good show as well - Tom Hardy played a scary, intimidating looking Bane, Anne Hathaway made quite a pretty and sexy Catwoman, Marion Cotillard gave us a surprise in the climax by revealing to us who she really was, and Joseph Gordon-Levitt almost had be thinking he was going to be the replacement Batman in the middle of the movie (I thought he would be Azreal), but in actual fact turned out to be Batman’s future sidekick (we were informed that detective John Blake’s real name was “Robin”, hint hint).
Other things that impressed me were the magnificent epic Hans Zimmer soundtrack, the special effects, the setting and atmosphere of the city, and the action sequences. The only thing that I was disappointed with was the fight choreography for the Batman vs Bane scenes. There was not much martial arts techniques displayed, more like a “I punch you, you punch me” kinda brawl. They should have thrown in some mixed martial arts techniques like armbars, joint locks, takedowns, parrying and dodging. Both Batman and Bane were supposed to be trained by the League of Shadows, after all. Oh well, you can’t have everything perfect, I guess.
Nevertheless, I was blown away by Dark Knight Rises. Definitely worth several return viewings. It's the final episode of Christopher NoIan's Batman franchise, and I would rate this one a 5 out of 5.
Any chance Nolan wants to do a fourth Dark Knight? Pleeeaase...?
1 comment: