It's not easy being green
By Davin Arul 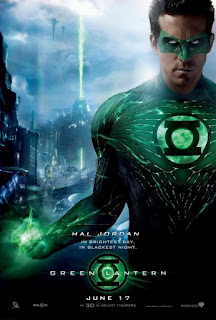 Green Lantern
Rating(out of 5): * * *
(Warner Bros.)
Starring: Ryan Reynolds, Blake Lively, Peter Sarsgaard, Mark Strong, Temuera Morrison
Ryan Reynolds? Not a fan, after Blade: Trinity. I received the news that he was to play Hal Jordan pretty much the same way I reacted when my dentist said he'd have to grind two perfectly good teeth down to stubs to fit my bridgework.
So, yeah … as much as I had become an overnight fan of the "rejuvenated" GL comics under writer Geoff Johns, I wasn't exactly looking forward to the movie.
When the previews hit, and more scenes of the Green Lantern Corps plus some of the series mythology was presented, I thought they might be on to something here.
After all, director Martin Campbell kick-started the stalled James Bond franchise – twice – and made an old-school masked avenger like Zorro all modernsexycool.
An intergalactic canvas, however, is not so easily painted on, even with green as the dominant colour in the palette.
The result is an origin story that falls a bit short of the best "begins" movies to spring from the DC stable (the gold standards would be Superman: The Movie and Batman Begins).
So, while the filmmakers certainly were on to something here, they don't exploit it to its fullest. There are, however, enough fan-pleasing moments and appearances to keep … well, at least to keep this fan happy.
As an example, there's a scene where supporting character Amanda Waller (Bassett), a prominent member of the DC Universe, brushes against a telepathic supervillain (Sarsgaard) and he accesses memories of her husband and children being murdered – as they were in her comic-book roots. Pretty good attention to detail there, I'd say.
For the uninformed units out there, Green Lantern is the story of how brash test pilot Hal Jordan (Reynolds) is chosen to become a member of an intergalactic peacekeeping force known as the Green Lantern Corps.
The Lanterns are each equipped with a power ring that conjures up whatever the wearer can imagine, from jet fighters to giant fists to, uh, Hot Wheels-style stunt car tracks (really).
Oh, and they can also fly through space and travel incredible distances in the wink of an eye.
Unfortunately, the circumstances of Jordan's recruitment also bring our young and humble planet to the attention of an ancient, destructive entity known as Parallax – a twisted creature that will devour anything in its path to get revenge on the Lanterns and their creators.
The Parallax of the movie is significantly different from what longtime readers of the comic would picture – not just in appearance but in origin too.
The villain aside, there's been some dumbing-down of much of the Green Lantern mythology to make the movie more accessible to the un-clued-in viewer.
At least Campbell and his production designers did go to obvious lengths to ensure that, if anything, the film would live up to expectations as a visual adaptation of the comics.
The planet Oa, home of the Lanterns, the dazzlingly diverse members of the Corps, even the made-of-pure-energy Green Lantern suits with their "fibre-optic networks", are all wonderfully rendered.
What about the main character, you ask? Well, to a degree, Reynolds handles the cocksure, deeply troubled aspects of Hal Jordan well and acquits himself satisfactorily when the character undergoes the inevitable transformation into a confident hero able to overcome his fears.
Given the numerous triumphs and tragedies in the character's (printed) life, in this sense the film does a nice job of depicting Jordan's struggle to rise above his own character defects.
So, while I'm still no fan of Reynolds, at least it will be all right having him in the role for however long the franchise survives.
The best interpretation in this film is, for me, Mark Strong's Sinestro, perhaps one of the most complex characters in mainstream comics.
His initial disdain and eventual respect for Jordan mirror the characters' relationship in the comics perfectly, and Strong makes a fine meal of it all – he even carries the red makeup and pointy ears majestically.
The hits: the visuals, Strong, Sarsgaard as a human supervillain with daddy issues, some good action scenes, and a funny bit that shoots down the whole notion of why heroes wear masks.
The misses: Parallax (ok, so he/it wasn't as bad as the movie version of Galactus), not enough Corps time, a messy story flow and somewhat cartoonish ring constructs that hark back to the silliness of the 60s and early 70s comics.
Oh, and the 3D – absolutely unnecessary in my opinion, as it just got in the way of my viewing pleasure and had no truly memorable "comin' at ya" moments.
All things considered, I found Green Lantern to be an enjoyable but flawed entry in the superhero sweepstakes, much like Thor. Both have got the look right, but we're just not feeling it yet, yo.
No comments: