First Class Is One Fine, Kick-X Ride
By Davin Arul 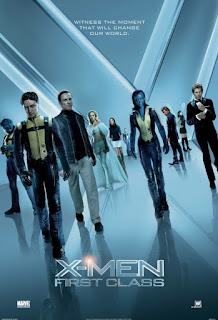 It's too bad none of the X-Men comics have "terrific" in their title, because it would be quite appropriate for this latest movie in the series. Not quite Uncanny and not exactly Astonishing, First Class is nonetheless Terrific, in the "extremely good" sense of the word.
After the X-franchise stumbled with the melodramatic The Last Stand and the unfocused X-Men Origins: Wolverine, it can hold its mutated head high again with this latest entry. There's action, pathos, romance, a bit of tease 'n' sleaze, international intrigue, and scenes that look as though they were shot directly from a Frank Quitely drawing.
First Class is an origin story of sorts, showing how Charles Xavier/Professor X (McAvoy) and Erik Lensherr/Magneto (Fassbender) came to be friends and then enemies. Big deal, you say? Tell it to Laura Palmer?
Not so fast.
With a pair of charismatic leads in McAvoy and Fassbender, and a director whose previous comic-adaptation credit can only be described as, well, kick-ass, First Class is that rare prequel story that manages to evoke strong feelings for both the characters and even for the unfolding events that show how things came to pass - even though we already know how it all turned out. The journey truly is the reward in this instance.
I found myself caring enough about their friendship to be drawn into it, ideologically polarised and doomed as it is.
The story takes place (mostly) in the early Sixties, as sinister forces are shown to be behind the Cuban Missile Crisis, with the intention of triggering World War III.
Beyond Charles and Erik, the story involves Hank McCoy/Beast (Hoult), Raven Darkholme/Mystique (Lawrence), and a host of other mutant supporting characters.
First Class does play fast and loose with continuity by plucking these supporting characters (Havok, Banshee, Darwin, Angel Salvadore) from all over the X-timeline, even dumbing down some of their back stories and turning a few into mere flunkies.
In the comics, Azazel (Flemyng), for example, is a mutant who has lived since Biblical times and is ruler of his own dimension - not to mention the father of Kurt Wagner, a.k.a. Nightcrawler. Here, he's reduced to a mere hitman, though a chillingly effective one, for the Hellfire Club.
Speaking of which, it's about frakking time these major X-villains made their movie appearance. In this film, they are represented by energy sponge Sebastian Shaw (Bacon) and telepath Emma Frost (Jones), who has the added ability to turn her body into diamond.
Shaw's megalomaniacal plan, hidden submarine lair and insidious charm - not to mention snazzy dress sense - would seem to make him a perfect Bond baddie; and indeed, First Class with its Cold War tensions and grand-scale villainy has a good vintage 007 vibe going (heck, even the end credits reminded me of Dr. No).
Colourful as these villains are, it's more interesting to see how the lines get drawn in the movie version of the X-Men mythos, how Charles and Erik's respective approaches to "integrating" with society differ radically.
The creators of this film do more to show how a strong bond can be created and then shattered in just one outing than Star Wars managed in three whole prequels. (Though calling the SW prequels "whole" is a bit of a stretch. But I digress.)
The Charles-Erik relationship has a good parallel in the Mystique-Beast dynamic, both afraid to show their true selves to the world but eventually compelled to do so for entirely different reasons. Mystique's interaction with Charles and Erik, too, adds a whole new dimension to the character that was only hinted at in the earlier films.
In this sense, watching this movie is like reading a well-written and beautifully rendered comic and seeing all the threads from previous instalments falling into place.
Ultimately, there are some inherent pitfalls to being a prequel that just can't be avoided, but First Class still succeeds both as a thrilling, spectacular piece of entertainment, and as an intriguing study of the central characters in an epic saga. Oh, and watch out for two surprise cameos that are just the thing for those who are missing the earlier films - no need for a poorly-CGI'ed Patrick Stewart here!
No comments: